Jeez, Olympics. Can't a girl get some sleep? 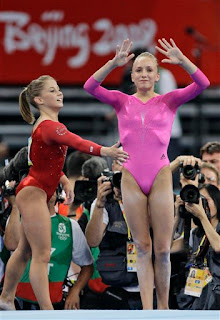 The Olympics has seriously been messing with my sleep schedule. They don't start until 8pm, which means they're usually not over until midnight. Last night, they weren't over till 1:30. AM. That leaves us with a measly 5.5 hours of sleep before heading off to work. Dear lord, are we crazy?

Of course, they show the best stuff last, spending the first hour or so of coverage on semi-finals of indoor men's volleyball, and pre-qualifying rounds of swimming that doesn't involve Michael Phelps. They want you to stick around until the end, when it's the all-around women's gymnastics, and when Phelps has a chance to win yet another gold (PS - you'd think we would be sick of Phelps winning by now, but no. Can't. Stop. Watching. He's even tricking us now...trying to make it look like he might not win and then pulling a full body length ahead in the last few meters of the swim. What a tease.).

It was fun to watch our awesome athletes do what they do...and you better believe I'll be watching again tonight -- thank god I can sleep tomorrow morning though. These late-night Olympic viewing marathons (um, we watched 6.5 hours of Olympics last night!!!) are
taking a toll on this working woman and her working man.

Someone suggested TiVo'ing the competition and watching it when I get home from work, or even over the weekend. Um, clearly this person is not a true Olympics Obsessor. Here's what's wrong with that philosophy:

Anyway, back to work. I can barely keep my eyes open, and I may need a nap before tonight's competitions...and boy, will I sleep well tomorrow morning!
Posted by Kim at 9:59 AM

Email ThisBlogThis!Share to TwitterShare to FacebookShare to Pinterest
Labels: ranting and raving