If you're reading this on my blog and not in a reader of some sort, you may have noticed that the commenting system looks a little different. If you've been reading for a while, you know that I work for Disqus. And if you've been doing your online-tech-startup-etc-research, you might know that we just beta launched the latest version of our system.

You can read more about it and sign up to test it out on your own blog or website here!

There's still a ways to go before the Big Fancy Public Launch next month, but you can get a sneak peek right here :) So play around, and let the team know what you think via the feedback link (or just let me know and I'll pass it along).

Email ThisBlogThis!Share to TwitterShare to FacebookShare to Pinterest
Labels: Disqus

Since yesterday's post was kind of a downer, I thought I'd follow it with a garden update that's a little more upbeat.  When I initially posted my question about pests to Facebook and Twitter (pre-blog post), several people suggested surrounding the at-risk plants with ash. Apparently snails do not like ash, and won't cross the borders? We just happened to have a bit of ash in our fire "pit" outside, so I scooped up a bucketfull and began to distribute it.

And now, a garden progress breakdown:

Along the back wall:
sweet peas (mostly doing ok, though they're not growing much)
climbing beans (growing a bit, they look leafier!)

Directly in front of those:
basil (not growing super fast, but not dying either)
cherry tomatoes (3 varieties, 4 plants, look like they're doing ok?)

Directly in front of those:
parsley (surprisingly doing ok, I thought for sure it'd be dead)
marigold (no flowers yet, but it looks strong)
strawberry (plant looks good, but we're going to have to fight the squirrels for the berries)

Front row:
rainbow chard (see above, and previous post, sigh)
kale (awesome possum!)
peppers (lookin' good, aside from the one that was starting to get eaten; it now has an ash ring)

Along the right side:
sunflowers (see above; they look taller, but no flowers yet of course)
lemon tree (looks super much happier since we staked it with bamboo and it's standing upright! I guess it likes not having droopy branches)
anise and poppies (not pictured, but they seem to be doing well!

Sunlight Report:
According to the SunCalc, which I placed in an area of the veggie garden that I thought was the least likely to be getting awesome sun (near the chard and cucumber), we have Partial Shade.  Not as good as Full Sun or even Partial Sun, but I've heard tell of Bay Area gardeners having luck with these types of plants in Partial Shade. Plus, the other half of the garden gets better light. I'm going to test the other side (closer to the spinach) tomorrow or later this week, depending on which day I get out of bed early enough to get a good reading.

Things have grown quite a bit since the first pictures were taken two weeks ago!
Posted by Kim at 2:00 PM 15 comments: 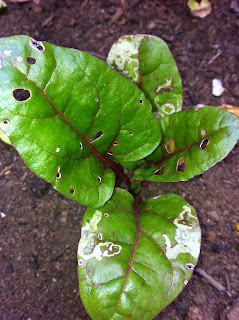 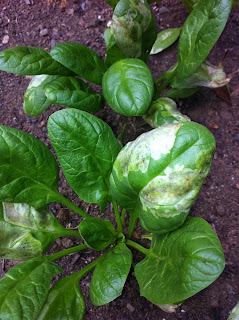 For my birthday this year, I decided to host a "Garden Party". I was eager to start my vegetable garden (since I couldn't do it before we left on our honeymoon), and wanted a low-key birthday after all that traveling, so I invited friends over to BBQ and help me garden (or watch me garden).

I have to give props to my friends, here: they were good sports about it, helping to break up the old soil and incorporate my fancy new soil, and helping me prep for planting!

I'm more in the mood for photos than long paragraphs today, soooo here ya go:

Today was the day for the main Gardening Event...le planting! Since the soil had been prepped so well yesterday (thanks, guys!), it didn't take long to get started. Let's see how it went, shall we?


We had fun planting the veggies and such today - our first real garden together :) Will was pretty into it too, so hopefully between the two of us, we can keep some of these plants alive! I don't have the best track record with growing vegetables, but everyone deserves a second chance, right?

I'm already thinking about looking into various snail deterrents - I think we have snails aplenty and I don't want them eating my vegs! Also: yes, I will be caging the tomatoes when they get a little larger. Also: will probably have to tie tinsel to some of the plants to ward off squirrels.

Wish us luck...and give us advice! (but please, only advice we can take...no "you planted everything wrong" notes, please! I don't think I can take it!)

Ok, you found me. I'm back. I tried to hide for a few days; with the sleepy weight of jetlag and the busy days catching up at work, it wasn't too hard. But enough public online (and gchat) pestering, and I feel obligated to provide a small "Oh yeah, I'm back, and I didn't even really tell you I was leaving" update :)

Somehow, in the final sweep of honeymoon-preparedness (both at home and at work), I "forgot" to mention that Will and I were about to embark upon a 24-day honeymoon in Europe. Oops! Apologies.

I'm back now, and though the pictures have yet to be sorted and edited and re-sorted for public consumption, I wanted to offer a little taste of our travels. To whet your appetite for the surely disappointing blog posts that will inevitably start off strong and then peter off when life gets busy once again. I mean, I'm pretty sure that I stopped a journal entry before the final week of our trip (like stopped mid-sentence) and never finished it...oops again.

No more excuses though.  Just a little sharing because you've been asking, and because it's fun to share. Soon I hope to (re)turn to the blog posts of yore, of home projects still to be completed, and organization/cleaning projects that make our house look happy and clean and comfortable. For now...one picture from each city we visited. These photos don't sum up the entirety of each locale (for that, they will each get their own post), or even necessarily give a broad representation of each place (you wouldn't see most of these on the cover of a guidebook for that region), but they do give you a little preview of something fun that happened, and hopefully they'll make you want to read more. If not, just ignore these posts and skip to the more enthralling posts about Tupperware and cooking mistakes.

PS - To everyone who helped to make Roger a possibility while I was away, whether through donations or spreading the word, I cannot thank you enough.  More on this project to come, but for now, please accept my gratitude.