Well! After all that...it's finally up and running! I have done 3 loads of laundry already tonight, and it's awesome! It didn't go as smoothly as I had hoped it would, but it's working great now and I am tackling the massive pile of laundry that was this: 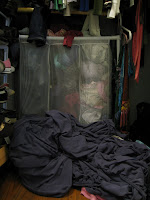 I know, it's bad. The result of *really* needing to do my laundry, and putting it off because I was going to buy a machine (and because the delivery/install day was later than I had planned). Regardless, now I can tackle the pile.

A little memory of what the "laundry room" looked like before... 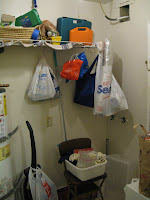 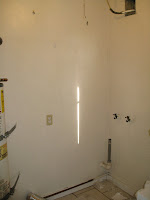 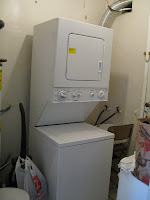 I love it! I think it needs a name. But I think a lot of things need names, so don't listen to me. I love my little laundry center!


Also purchased and set up today: the kitchen cart. Check out a picture of it in all its glory below. It involved reorganizing my "dining room" area a bit, and I rather like the new setup! 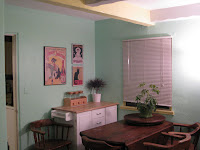 I'm rather worn out, since I've been alert and active since 8:30am, and a good part of the day was spent hanging out with my 2 year old "niece" - throwing around a 35 pound wiggle worm all day will work a girl's muscles! I don't know how her mom does it, but she tells me that's how she is suddenly so strong. Go figure. Anyway, the kid now thinks I am the awesome and fun Auntie Kim, who lets her color and gives her pickles and picks her up and throws her in the air. Several times today, she said "Kim, I show you!" and grabbed my hand to show me something (usually the refrigerator), and when she would look up at me, arms outstretched, fingers wiggling, I mean, what was I supposed to do? Not pick her up because I was tired? You just try to resist those dimples!