I am participating in my first-ever college basketball March Madness tournament pick 'em bracket challenge thing! Woo! The California Golden Blogs do one of these every year, and I never get involved because I don't know anything about this stuff, but this year, I figured why not throw my uninformed hat in the ring? It doesn't cost any money, and maybe I'll learn something. For example, why is California in the "East" but Connecticut is in the "West"?

Below are my picks, and my reasons for picking. Enjoy!

So there you have it. I clearly know what I'm doing, and obviously have high hopes for my tournament picks. Think I'll win the Bracket Challenge?

I've decided only to write about my picks for the MidWest bracket/level/category, because it took me a while to write this up, and I just realized that there are still 4 more categories (West, East, South, Semis & Finals) to go. If you have any questions about my picks in those categories, just ask. I'll gladly explain myself. Just know that the answer you get will probably sound something like the justifications you just read. Think you can guess why I picked certain schools over others? Leave your guesses in the comments... 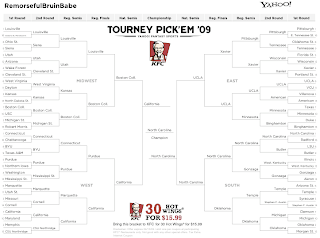 my full bracket. click to enlarge.
Posted by Kim at 11:09 AM