My dear friend Kate came over last night to make homemade Samoas. That's right, we decided to attempt a DIY Girl Scout Cookie recipe. And let me just say that it was a pretty exciting event. We did an amazing job, and these are possibly the best cookies ever made. Yep. Mhmm. Absolutely.

Rather than attempt to describe in just words how incredibly, incredibly awesome they are, I thought I would chronicle the night in photographs, and use them to tell our story. So enjoy. Thank you. 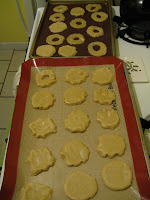 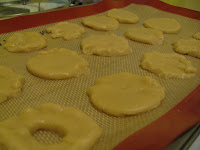 We could tell something was wrong from the very start. My stand mixer (which I believe was my Grandma's from the 1960's - Mom, correct me if I'm wrong) started to smell a little like burning rubber. The dough was a bit too wet, no matter how much flour we added. I didn't have the proper-sized cookie cutter, so we used the smallest circular Tupperware in my cupboard, which was obviously too big. I didn't have a "wide straw," and we didn't have the patience to cut holes with a knife, so we used an upside-down wine bottle to make the holes in the middle...until we got lazy and decided to make the rest without holes. 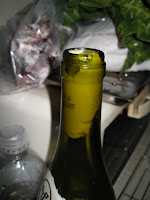 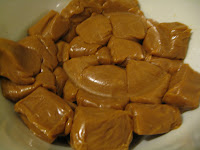 Two early errors:
#1: dough getting stuck in the wine bottle we were using to punch holes in the cookies.
#2: to save counter space, I stacked our chocolate chip bowl and coconut bag on top of the caramel bowl. I hadn't anticipated the bowls sticking together (duh. caramel + bowl = sticky). Kate and I trying to pull the bowls apart was laughable. In fact, this was the first time we laughed so hard we cried - but it would not be the last. You can see the imprint the bowl made on the caramel in the photo above. 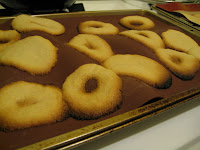 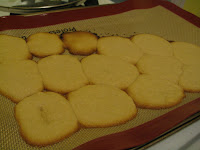 As we had feared, the cookies were thin and crispy when baked. We had hoped they would rise and become firm, perhaps by some force of magic, but no such luck. Not only did they turn out thin and crispy, however, they either caused strange silicon mat warping (see photo on left) or slid to one side and stuck together (see photo on right). So sad. 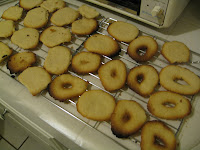 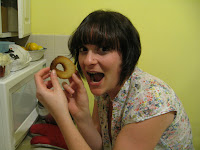 Our sad-looking cookies cooling...and just looking sad. Kate looks happy though. Nothing will bring us down! We Will Make These Cookies!!! 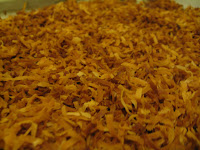 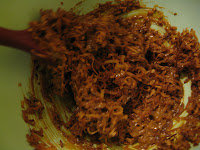 The coconut toasted up nicely in the oven, and we thought that maybe, just maybe, these cookies would not be an epic failure. "We'll just make the topping and cover up the sad little crispers!" - or so we thought. The caramel-coconut topping came out fairly well, but was nearly impossible to spread. The cookies kept breaking, despite our gentle-spatula-application methods, and the caramel-coconut didn't adhere to the cookies so much as sit on top. I thought it would be easier and more gentle to use my hands instead of a spatula, so I reached in - and oh yeah. Remember how we heated it in the microwave for like, 4 minutes? And remember how that usually makes things hot? Really? Logic? Apparently not for Kim. I burned my fingers. Oh, and did you know that caramel-coconut is incredibly sticky? And that it's hard to get off your fingers? Sigh. 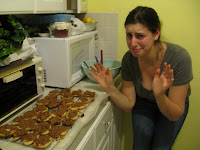 My poor little phalanges were burning up, and there wasn't much I could do about it but shake them and collapse on the floor in teary-eyed fits of laughter. Luckily, Kate hadn't burned her fingers (yet) and could capture the moment on camera. Thanks, Kate. 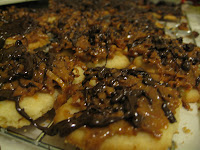 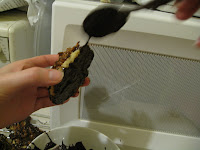 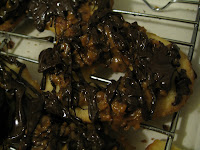 We had hoped that adding the chocolate would suddenly turn these cookie-tastrophies into Samoas. If this had been a TV show, the cookies would look awful, we'd wave some chocolate around, and it would all turn out perfectly. This was not a TV show, and it did not work so much like that. However, I will admit that they looked slightly better avec chocolat. Kate tried to dip one in chocolate (did I mention that we completely skipped that step in the recipe because it would have been nearly impossible to accomplish? because we did.), and resorted to spooning the chocolate onto the bottom. It worked...kind of. At least we got to drizzle chocolate with a fork (by this point, we were essentially on our own, deciding that pouring our melted chocolate chips into a pastry or ziplock bag was just a waste of a bag). At this point, the tears of laughter blurred our vision, and we didn't even care what they looked like. Playing with melted chocolate is always a good idea.

So that's the story. A few more photos below just for fun. And boy, was it fun. 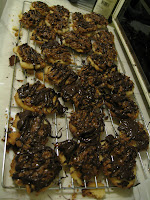 Our finished racks of cookies. If you can call them that. 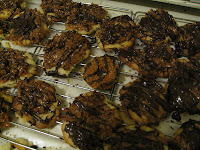 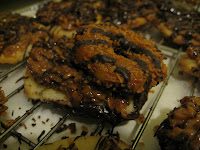 We were so delirious that we created Samoa piggy-back to demonstrate how much larger our cookies were than they were supposed to be. Funny, no? Yes? We didn't even know what we were laughing at at this point, but we couldn't stop. Until we started watching SNL - which unfortunately brought us back to a calm and un-hysterical place. Come on, SNL. Get it together.