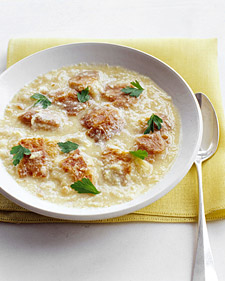 The other night, The Boy and I made this Garlic Bread Soup, a la Martha Stewart. It didn't turn out quite like I thought it would. It certainly wasn't as gorgeous as the picture from Martha Stewart's website (see right)

I made a few adjustments to the recipe, and maybe that was the fatal error. Ok, that's a bit dramatic. But it didn't turn out great, just ok. And usually, I am a genius in the kitchen! Kidding, but it was odd to use my usual method of following a recipe and tweaking it a bit and to not see the results be amazing. The Boy would be proud of me for not "Pollyanna-ing" the situation here, but seriously, it was just not that good. It was edible, but the garlic was overpowering, and the bread broke down almost completely, giving it a weird and mushy texture. Sadface.

Anyway, we used 4 cups of chicken broth instead of 5 cups of chicken stock, and added a few pieces of Trader Joe's "Just Chicken" strips. I may have used too much garlic. I added a bit of Chardonnay to combat the garlic (I don't know why - I think I just thought adding wine to the situation would help). Sigh.

There are, of course, leftovers. Not one to waste, I've been trying to think of ways to re-use the leftover garlic mush "soup" - to repurpose it and transform it into a magnificent meal! Can She Do It??? She can! And she will! Determination, people! It's what happens when you are unemployed and hungry :-)

After talking to Raelene, my thoughts of adding sausage or tomatoes to it are confirmed "yeah that might help" ideas, but I am also armed with some nice alternatives that I think would work even better. I think the best way to approach the situation it is to think of it as a sauce, not a soup. It's really not great on its own, but used as a pasta sauce (with chicken or Italian sausage) or a pizza sauce (on some fresh whole wheat dough), it might really be tasty. She suggested searing some chicken in olive oil so it gets a nice caramely crunch on the outside, and topping with fresh herbs and/or fresh parmesan cheese. I have some fresh sage and parsley that would accent it nicely. She suggested lemon juice (or other citrus juice) to "bring it to life" a bit, and whaddya know, I happen to have both lemon and lime juice in my fridge? :-)