WHAT IS THIS CREATION??? 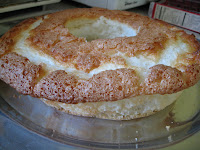 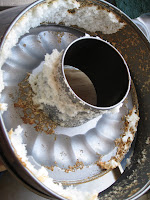 I attempted to make an angel food cake the other night, after offering to bring dessert to my friends' house and then realizing I had no eggs at home. Not willing to pay $4 a dozen at Berkeley Bowl (PS - why does BB West have cheap eggs, but regular BB does not? discuss.), I instead went with a $2.50 box of angel food cake mix. Just add water! Easy! 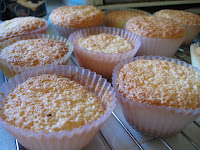 The instructions said not to use a pan smaller than 10"x4", and my pan was definitely 9"x3", but I decided to go for it, pouring some of the batter into silicone muffin cups. The angel food muffins came out great, actually. Not so much with the cake. It looked beautiful in the pan, and I even turned it out onto a glass bottle (ok, a drinking glass, but still) per the instructions. But alas, as it released its grasp on the inside of my cheap IKEA springform-pan-with-bundt-insert, it flattened. Flattened miserably. See photo. Oy. It sort of resembles a large, flat muffin with a hole in the middle. 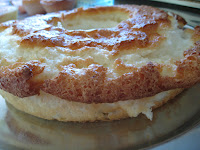 It tasted great though, and I suppose that's all that matters. I didn't take a picture of the finished product, because we were so anxious to eat it, but Mark and Erin can vouch for its awesomeness. Blueberries, raspberries, stawberries from their garden. Guittard chocolate chips melted and sort of mashed/spread over the top. It was yum. We were on a train to flavortown, as Guy Fieri might say on DDD (one of new my favorite shows, fyi)
Posted by Kim at 10:24 PM