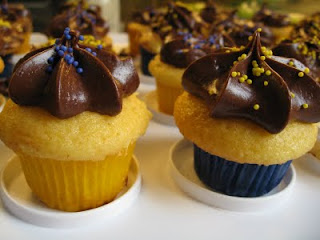 This morning, at 9:00am, Cal played Minnesota. Golden Bears vs. Golden Gophers. And my contribution to the game-watching party (TiVo'd at a friend's house, starting a little after 10am - the game was in Minnesota and we didn't all get up early enough to start watching at 9) was a tray of mini cupcakes. My theory was that if you're gonna eat cupcakes for breakfast, they might as well be tiny cute ones! With Cal-colored decorations! Cute!

Bria, Shanna, you're going to scold me again, but I used Betty Crocker butter yellow cake mix. :-) I had never bought butter yellow - I guess I usually just buy regular yellow...because I was totally caught off guard when the box said to add a stick of butter (in place of the usual oil). That's what I get for buying a box of cake mix just because it's on sale (for $0.99! I mean, come on!), I guess. Oh well, they tasted good. Even if the frosting slid off the tops of some of the cupcakes (theories? I have no idea why this happened. Yes, the cupcakes were cool when I frosted them). And even if half of them got knocked over in the car on the way to Erin's house.

Please enjoy the photos below. I thought the cupcakes were so cute, I had to take a billion pictures. PS - even though the 3rd quarter was a bit shockingawfulterriblehowtheheckaretheynotplayingwellanymore, the Bears won the game. Yay! 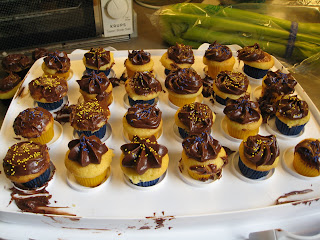 All lined up, like ducks in a row. Messy, smudged ducks. Ducks? I mean bears. Golden bears. 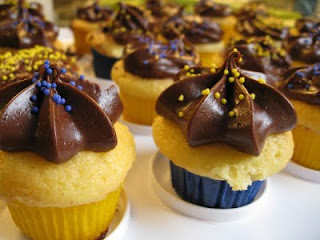 I was really excited to decorate with my new pastry tip. It is awesome. 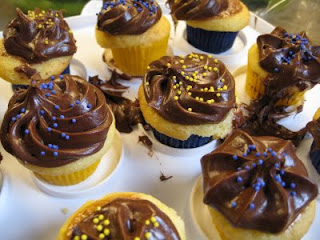 Closeup of some other frosting designs (made with the same tip), and more smudged frosting. In the back (top right corner), you can see the frosting sliiiiding off the top of a cupcake. WHY, frosting, WHY?!?
Posted by Kim at 11:45 PM