The thumbs, not so green...

Ok, so I don't pride myself on being a super gardener or anything, but usually, I am pretty decent at keeping plants alive. I was fairly confident that my first tomato plant would be a bust, and it turns out that I was right. I'm not gonna lie, I did sort of give up on it. After that first little burst, it just stopped growing, and the leaves just kept getting browner and browner. And in semi-related news, my Trader Joe's basil plant was also looking pretty sad. The leaves were just not growing back at even a fraction of the speed at which I used them (ok, maybe a tiny, tiny fraction, like 1/10000000). I would use a few large leaves, and maybe a week or so later, a few teensy, yellowish leaves would grow back. Not so good. 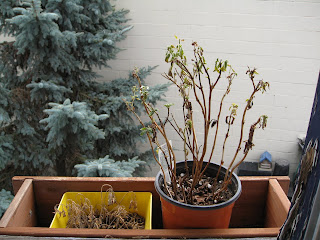 Pretty Sad
(click to enlarge if you want a closer look at the devastation)
I realized last week that this would just not do, and that I would need to get some new life in this here window box. And today, at Trader Joe's, miracle of miracles, look what I found! 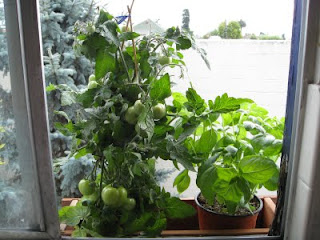 Ta-Da! Lush! Green! Edible!
(click to enlarge if you want to bask in the glory of my store-bought plants)

This little tomato plant was about $4.50, and had around 15 green tomatoes already on it (the basil was $2.99). The bagger at TJ's said that about half would probably ripen right away, and that I shouldn't re-pot it because it was so grown already that it would just shock the roots. No re-potting? Sounds good to me. Besides, the tag on the plant said that this is the full height of the plant (though supposedly more tomatoes will grow - I am skeptical). Now this is my kind of tomato plant! Dripping with fruit when you bring it home from the store...instructions not to re-plant it...what more could a girl want? And if none of them turn red, well, then it's fried green tomatoes for all (recipe 1, recipe 2)!