Will and I are going through a bit of a brussels sprouts phase at the moment. They have been selling them on the stalk at Berkeley Bowl lately, as shown in this picture that I did not take, and last week, I couldn't resist. Just $2.39 (I think? Maybe $2.49?) got me a gigantic stalk that resulted in enough sprouts for 3 meals (and a little left over for me to take to work tomorrow).

The first batch was the thin-sliced sprouts with nutmeg and cranberry that I posted about a few days ago, but the last two batches have just been our old standby recipe. I'd like to share it with you here, in honor of my dear friend Shannalee who is just learning to love these adorable little mini-cabbages.


The recipe, as it appears in my comment on her blog: 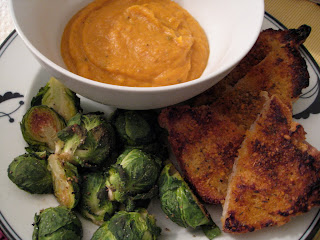 I usually make these in the toaster oven, since it takes less time to heat than the regular oven. Simple, easy, delicious. Mmmmmmm! Shown here with homemade butternut squash/pumpkin soup and garlic toast made on homemade sourdough bread. I was feeling cozy on Friday night.

Speaking of the soup...it was based on this recipe, though I made quite a few alterations. I only had 1.5 lbs of squash, so I tried to adjust the recipe accordingly. I am not so good at this. It took Will about 2 seconds to realize that I should "third" the recipe (as opposed to "halving" it), while that math was pretty much incomprehensible to me. I just kind of fudged the numbers, because I figured it's soup and as long as it all gets mashed together it would probably taste good.
Anyway, I used my 1.5 lb squash, a 15 oz can of pumpkin, and about 1/2 quart of chicken stock. Per the author's suggestion via email, I added a sprinkling of nutmeg and curry powder, a bit of salt and a lot of pepper. And a fair amount of water (no idea how much) to thin it out a little. I also added some lemon juice (because I can't resist adding lemon juice to just about everything). I think that's it...I just kept adding and stirring until it tasted good. 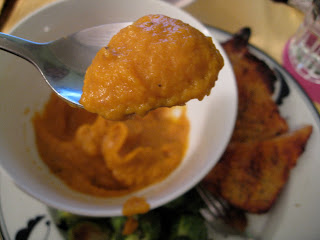 It ended up being more of a squash mash than a soup (it was very thick), but it tasted good. The pumpkin made it pretty sweet, so I'm glad I added the lemon juice, but it was pretty darn good considering I made it from scratch. We'll eat the leftovers for dinner this week before we head to our respective families' homes for Thanksgiving.

And for your pleasure, a picture of the adorable butternut squash. I bought it at the farmers market a few weeks ago because it was just too cute. Look at those tiny seeds! 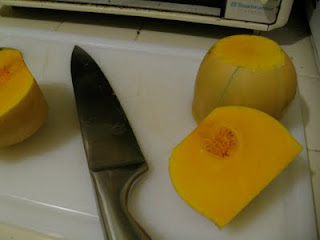 In other news, I went on a little Trader Joe's box mix spree this morning...all the wonderful holiday mixes are in stock right now, and since they're only around for a few months and don't expire until 2011, I grabbed a few boxes (2 apple spice bread, 2 gingerbread, 1 pumpkin pancake/waffle, 1 pumpkin bread) and a few cans of pumpkin, just in case I need it in a pinch and can't make from scratch (or because I'm a hoarder). I'll probably end up doing one last stock up before the seasonal mixes go away for another year. They are just so good! I cannot resist! I also got a jar of cranberry apple butter...the pumpkin butter is superb, and I thought the cranberry apple would be a good choice as well.

I am currently making this recipe for chocolate chip pumpkin bread (1 loaf, 12 muffins), though I substituted 1/2 cup apple sauce for 1/2 cup of the oil. It smells divine, and my coworkers will thank me for the muffins, I'm sure! :-) It's chilly up here in Berkeley, but I am staying cozy and enjoying the holiday season so far! I can't believe Thanksgiving is almost here!
Posted by Kim at 10:08 PM