I came home for lunch the other day, and found a lovely little package from 23andMe on my doorstep. 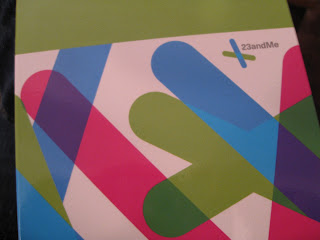 I knew the time had come for my saliva sample, but since you have to avoid eating or drinking for 30 minutes before you do it, I decided to wait until I got home from work.  Lucky you though, you don't have to wait for my photojournalistic recap.   Because It.  Starts.  Right.  Now. 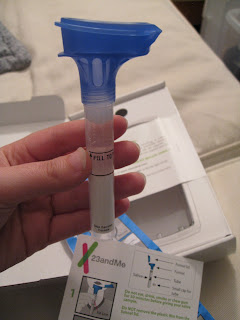 Yes, folks, that is a test tube fitted with a little spit funnel.  And yes, I made sure to provide enough saliva to meet the fill line. 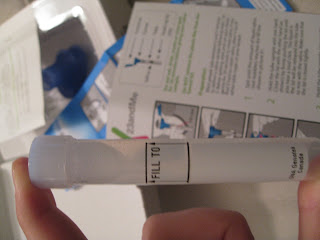 When you close the lid on the spit funnel thing, it releases a magical liquid that turns your saliva into mystical genetic-revealing ooze.  Ok, just kidding.  Maybe it's just some sort of clear liquid and I have no idea what it does.  But it's supposed to be there.  Anyway, you remove the funnel and replace it with the "small cap" (it was a pretty average-sized cap, if you ask me).  Then you shake.  For 5 seconds.  It didn't say to shake vigorously, but really, is there any other way to shake? 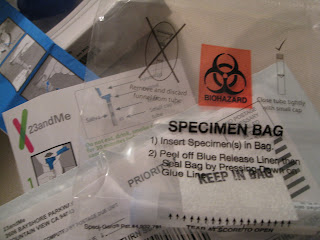 Once your spit-magical-liquid is nice and bubbly, you put it in the Specimen Bag.  Because it is now officially a Specimen.  Requiring a Bag.  The bag has a little piece of tissue that says "keep in bag", though I have no idea why.  The bag is also labeled "biohazard", which I can only take to mean that the liquid in the funnel lid is somehow hazardous, cause y'all know my saliva is pretty standard issue.  Maybe you didn't know that.  Maybe this has been way too much information about my spit.  Oh well; it's my blog. 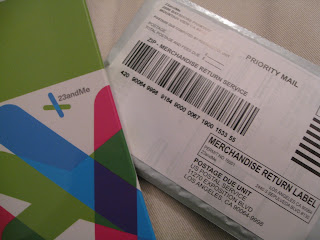 After you take your now-biohazardous saliva and place it in the aforementioned Specimen Bag, you place said bag in the postage pre-paid return envelope.  It's tiny and padded and kind of adorable, if I'm being completely honest.  Seal the envelope and drop it in the mail and you're all done!

The whole thing from opening the box to sealing the envelope took about 5 minutes.  It was kind of fun, and I can't wait to get my results!

Did anyone out there get a test of their own?  Have you done something similar in the past?  Are you madly, insanely jealous and hoping that next year on DNA Day, they offer the same deal?

Email ThisBlogThis!Share to TwitterShare to FacebookShare to Pinterest
Labels: 23andMe