Remember when this blog was about knitting?

When I first started this blog, I wrote about knitting a lot.  And funny story, I actually used my knit lunch bag today, on the day I will finally blog again about something I've knitted.  No kidding.  PS - I just realized that I never shared the finished bag, avec lovely star button (that I don't actually use as a button, because that buttonhole would just be annoying).  So here ya go.  The bag. 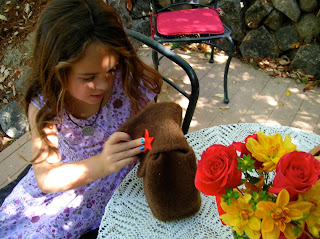 The lovely Miss Keira was my bag model, which actually ties in nicely with today's post about knitting.  Keira recently became a big sister, which inspired me to bust out my circular needles and learn how to make a little baby hat. Of course, my first attempt resulted in the tiniest hat known to mankind, which ended up being more doll-sized than baby-sized.  Perhaps (and this is just a guess) I have underestimated the size of a newborn baby's head.  Did you know that their heads are actually not all that tiny when they come out?  Terrifying.

I digress.  After teeny babydoll hat, I tried again...resulting in about 1" of twisted, mobius-y gigantor that would definitely have been too big for Baby.  I decided to invest in some slightly larger yarn, and use slightly larger needles, since um, I was frustrated and wanted to try again with something that wouldn't take quite so long.  I didn't want to venture in to the scary land of Double Pointed Needles, so I stretched that thing as far as it would go on my 16" Size 10 Circulars.  The result? The hat you see below on the left. 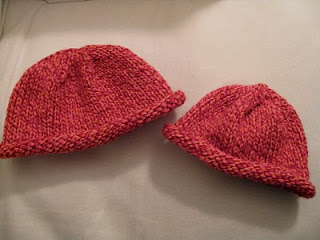 It was almost big enough to fit me.  My head is slightly larger than the head of Miss Baby, but I had extra yarn and tried again, casting on about half as many stitches.  The result?  An adorable pair of hats, perfect for Big Sis and Lil Sis to wear together.  And by golly, these hats better fit those girls! :-)


Actually, I made three hats in the last week.  Baby is getting 2 hats, because baby yarn is ridiculously soft and adorable.  I may have bought 4 different skeins of baby yarn. Attention friends: if you are pregnant, or recently had a baby, expect to receive a baby hat.  I might be obsessed. 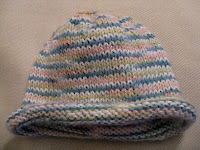 I got an amazing deal on a set of DPNs on Amazon (5 DPNs in 13 sizes for $21.99!), and figured I'd brave the DPN knitting on the smaller hat...smaller hat = more difficult to stretch out on the circulars.  And you know what?  It wasn't awful.  I made a little mistake when making the pastel hat (it was my first try), and used 3 DPNs total instead of 3 for the stitches and a 4th to stitch with, but you can't even tell.  See? 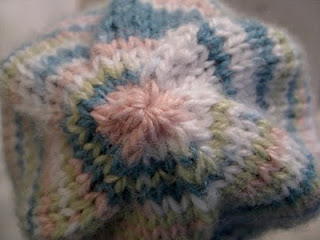 Thanks to Crazy Aunt Purl for her awesome tutorial.  Also, see this one about decreasing stitches.  She is hilarious, and is one of the main reasons I am not afraid of DPNs.  After finishing off the pastel hat, I finished off the bright baby hat, this time using the correct number of DPNs.  Wow.  That was way easier.  I might even say that I love doing this now.  It's pretty awesome, and I really like pulling the yarn through the stitches at the end to finish it off - there's something satisfying about pulling it all together (literally) like it's a drawstring bag.  Super!  No fear! 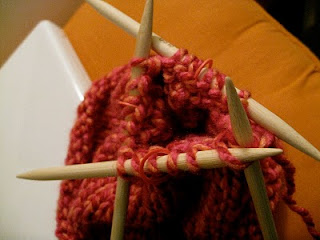 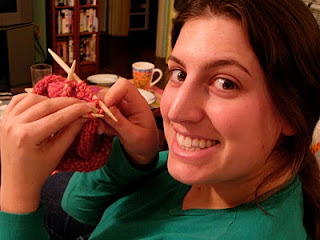