Being Married Is Awesome (or We Had a Good Weekend)

Several times this weekend, we caught ourselves saying, "Being married is awesome." Really what we meant was, "It's awesome having a 4-day work week, having friends over to drink beer and do puzzles, sleeping 10 hours, relaxing all day, and watching Jorge and Harper win their Senior Game at Cal (basketball)."  But hey, let's just call that "being married", shall we?  Deal.

Anyway, it's been a great week (despite battling a gnarly cold), and a fantastic weekend. And today, I was actually productive. Go figure! Maybe I was riding the wave of awesome from the last couple of days, but I was on fire, you guys! I did four loads of laundry, made my bulletin board of "to-do projects", finally unpacked that box in the bedroom that I've been meaning to unpack since...uh...we moved in in August, and miracle of miracles, I actually cleaned the top of my dresser!

This was no ordinary "scoop things up into piles" dresser clean, either. I actually went through old jewelry and got rid of things. I rearranged how things are placed so it makes more sense. I hung my necklaces and headbands and pictures omg pictures on the walls yay. And now, because photos are more fun than just writing, I'll tell the rest of this story with visual aides.

This is one of those times when I'm kicking myself for not taking "before" photos. Someone remind me to do that next time I tackle a house project, mkay?

One of the things I'd been meaning to do is organize my dresser. Again, a "before" picture would be really handy here, but just imagine a pile about 6" high, that had been growing and shifting over the course of several months. I got this dresser sometime in December (I think?), so I suppose it hasn't been that long, but still. At least two months of clutter just piling up does not a lovely dresser make. It had gotten to the point where I had trouble finding things; necklaces were in a tangled pile and pairs of earrings were separated, and despite the fact that I have a bajillion bobby pins, I could never find one.


Now, it's neat and tidy. I emptied every drawer of my plastic jewelry/hair stuff drawer-thing and made a sizable "donate" pile of earrings and necklaces I haven't worn since high school (I don't know why I still had them either). I re-organized my two "nicer jewelry" boxes (to the left of the drawers) so that it's easier to see what's inside. Next on the agenda will be making some sort of wire+frame device like this so that my dangly earrings are easily viewable. Maybe with some way to show off the posts too (stick them into foam, sans backs, perhaps?)

The mirror is actually leaning on the wall (secured with earthquake putty) because I somehow misplaced the bracket that you use to hang it. Oops. Hope it stays - it seems pretty secure, but you never know. Maybe the bracket will turn up. If not, I'll have to get creative at the hardware store (or with the earthquake putty, again).  :) 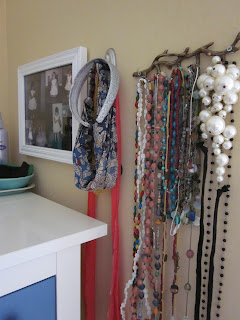 I hung my necklaces on a branch-looking key hook thing that I bought at Urban Outfitters while visiting my sister at UC Santa Cruz, so I've had it for at least a year. I lost it for a while, but found it again when we moved, so glory glory, I got to put it up! Sadly, it was not as easy to install as it looked...perhaps because it didn't come with screws (sale bin), and the screws I had weren't the right size. Perhaps because the walls are old and not super strong. I'm not really sure why it took so much work to get this thing up on the wall, but it seems sturdy enough for the light weight it's carrying. The headbands and such to the left are just hanging on a silver Command hook (love you, Command hooks!). Much easier to install.

More on the photo to the left in a minute.

First, how about a nice little close-up of my "handiwork"?


You'll notice an anchor that doesn't quite sit flush with the wall, a hole too wide for the anchor, a screw that's silver instead of gold, and if you look really carefully, you'll notice a little white putty-filled hole behind the necklaces. That's actually not actual putty and is in fact earthquake putty (previously mentioned...but you know, it's that stuff that you use to secure fancy glassware and crystal in your cabinets in case of an earthquake). Which reminds me, I need to do that in the hutch. In both hutches. Sigh. Anyway...it's staying on the wall, and it's nothing a little spackle won't fix when we (eventually) move out (some day, far away from this day).

And last but certainly not least, the photo. Apologies for the kind of awful picture of it, but I'm super glad to have found this such a great home in our house. This is a photo collage made by mom and aunt, given to each of my sisters, my cousin and me for Chanukkah this year. Clockwise from the top left is my cousin Talia, her mother (my aunt) Nancy, my sister Nicole (sorry I cut your head off in this picture!), me, my mom, and my sister Danielle. All wearing the same dress. It's been in our family since my mom was a little girl (I think she's just barely two in her picture), and we've all worn it (and been photographed in it) over the years. It's definitely one of those family traditions that will live on...as long as we have daughters :)


I'm really glad to have gotten this one project (well, two if you count the cardboard box full of office crap that's no longer in the bedroom! yeah!) done. Not the most crazy of house-related projects, but they were things that needed to get done, and the bedroom is starting to look much better. I'm starting to see little glimmers of possibility for our house now...having an unpacked, lived-in-but-not-messy, homey house with our own touches is within reach! Now that I can devote evenings and weekends to setting up the house instead of planning the wedding, I'm excited to continue settling in. I'm a homebody at heart...but we all knew that, didn't we?


PS - I was just looking at old posts, and realized that not one single time during the wedding/reception did I even take notice of the chairs.
Posted by Kim at 11:16 PM