Today was a day that included Shimmy Pop, a pedicure, baked salmon w/scalloped potatoes, a giant sinkful of dishes, homemade parsley pesto and chicken stock, and a crock pot of chili that is chillin' in the fridge, ready to cook while we're at work tomorrow. Unfortunately, no-knead bread had to be put on hold due to lack of rising/baking time. I'm exhausted, but it has been a very productive day. #bragbragbrag

Curious about that parsley pesto? I thought so. See, our garden produces an unseemly amount of parsley. I've foisted it upon our neighbors more than once, upon peeking over the fence and seeing them in their yard while I'm gardening. It grows back insanely quickly, and there's just no way we can possibly use it fast enough. A few days ago, I decided to just rip out as much as I could hold in my hands, thinking I'd find something to do with it. Only once I'd brought it inside did I realize how much I'd picked...
So that's a lot of parsley, right? I thought I remembered reading about parsley pesto somewhere on the internet once, and I figured that even if I was mistaken, there's basil pesto...and arugula pesto...so why not parsley pesto? For good measure, I Googled. Turns out, parsley pesto is definitely a thing, and plenty of people had their opinions on what makes a good one. Since I was Googling on my iPhone in the kitchen, I chose the second one in my search results (the first called for walnuts, which I didn't have,  and the second one had few ingredients and several stars).

Y'all, did you know that pesto is insanely easy to make?

Seriously, it took like, 5 minutes. Maybe less. I doubled the recipe, because hello, tons of parsley. 4 cups, to be exact. I know. FOUR CUPS of parsley. From our garden. I also added more olive oil as I saw fit, and lemon juice, because I'm a rebel in the kitchen.

4 cups of parsley = 1 cup of pesto. Just FYI. This shiz is delicious, and I can't wait to spread it on my everything, starting with a whole wheat English muffin (with cream cheese and lox) tomorrow morning.

And you know, because I'm an overachiever, I decided today would be the day to finally make chicken stock out of the gallon-sized bag of chicken scraps that's been in the freezer for a year.


After making the chili, it was time for a little chillaxin' on the couch while the stock continued to simmer. Around 10pm, I took out the trash, tidied up around the house, and knew it was time to face the beast. In a small moment of panic, realizing I was going to have to strain this sucker, I Googled "how to strain homemade stock" and the general consensus of the Internet was that I should line my strainer with coffee filters, to prevent little bits of stuff from getting in my stock.

I started by scooping the biggest chunks of veggies/chicken bits into the strainer with a slotted flat spooney thing (what are those things called?). Then I used a ladle to start pouring the liquid over the whole pile until the pot was light enough to lift and pour easily, trying to keep all the liquid within the confines of the coffee filter.
It totally (mostly) worked - my stock is a bit cloudy, but IMO, that's to be expected with my "no recipe, throw it in the pot" stock. But how to store my newly made gallons of stock? I don't have enough room in the freezer to do this, so I'm making do. The plan was to use quart-size freezer bags, but it seems I only have one left. What? Where are all of my baggies? Quelle horreur!

The two cylindrical containers in the middle are freezer-safe, hold 3 cups each, and are now tucked gently into the freezer. I have no idea how much stock is in the rectangular container and the two circular ones...I'd guess a total of another 6-8 cups. Tomorrow, I'll stop by the store for more quart-size freezer bags, so I can redistribute and freeze them flat for easy storage and thawing. Marvelous.

I tasted the stock when it was still pretty hot, and the flavor was frankly weaker than I'd hoped. I probably should've salted it, or used less water, or used stronger-tasting veggies or something. But it's my first batch, and it'll probably get more concentrated, flavor-wise, after some time in the freezer? Besides, stock is just the first step in making soups and risottos and all sorts of delicious things that get more spice and flavor added when you cook it, so I'm not too worried.

Ed note: Before putting the three non-frozen tubs in baggies, I decided to try the "reduce by boiling" method. This method ("method" = put it in a pot and boil it until it reduces down to a flavor you like) gets rid of some of the excess water, leaving you with a more concentrated stock. Which is perfect when your stock is too watery. Easy. I took the biggest pan I had (pan = better than pot, because more surface area = faster boiling), dumped in the two circular containers, and let it go. It actually reduced TOO much, and I was left with maybe 1/4 cup of supercrazyconcentrate. To water it down a tad, I added the rectangle container and boiled THAT down, with the supercrazyconcentrate (because I didn't want to remove it from the pan). About 30 min or so later, it had reduced by about half, and I had a quart of stock-tasting liquid. Delightful! It's now in the freezer, in a quart-sized ziplock freezer bag, ready tot use...someday. I'll probably end up reducing the 6 cups of watery stock too, but I didn't feel like thawing and boiling, since it was already pretty late :)

Not bad for one day.

And oh...I lit pumpkin candles. To offset my little white pumpkin. Because even though it was toasty warm outside today, it's fall. And I'm ready, clearly. 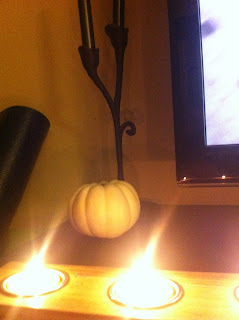