The area behind my couch has gone through many stages since I moved to this apartment in July of last year. None of the behind-the-couch storage solutions felt permanent; they all seemed like temporary solutions to a problem that wasn't too terrible.

A few weeks ago, I received a coffee table that was once my grandmother's, and has been living at my cousin's house for the last several years. I've told him forever that if he ever gets rid of it, I absolutely want it -- and somehow, he forgot that and gave it to my little sister who just moved into her first off-campus house (she's a sophomore in college). Alas! However...it turned out that her new place already had coffee tables, and into my car it went. Sadly, it is just too big for the space my apartment has for a coffee table, and besides, I already have a coffee table (also from my grandma). What to do???

I decided that I would find new legs for this grand table, and use it behind my couch. And today, that's what I did. The original legs just screwed off, and I was hoping to find new screw-on legs but was having a lot of trouble. Then I found this trestle thing at IKEA. It took a lot of tries to figure out how to get the table top situated, but several grunts and groans and a bit of blue painter's tape later, I had it all worked out. And I have to say, I really really like it. And I'm proud that I did it all by myself. Like a big kid.

Oh, I also (because I'm just that creative) turned the white cubicle things on their sides and used them as shelving. Genius? You decide. Pictures below. 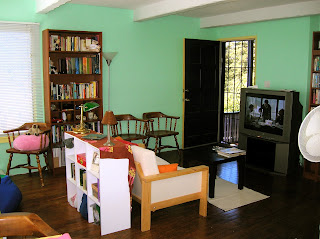 Stage 1: before I had the new couch...note the three ugly white cube things. 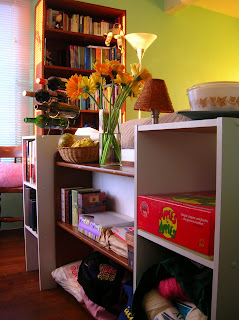 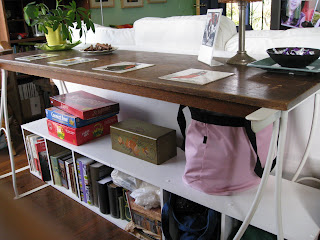 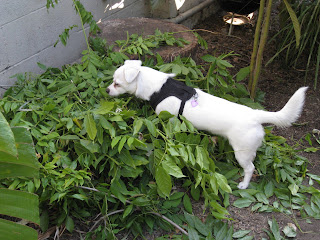 Gratuitous shot of my neighbors' cutie-pie puppy, Daisy.
Posted by Kim at 2:30 PM