Speaking of cooking...my friend Erin mentioned that she had no dinner plans tonight before meeting her husband for his band's gig, which provided the necessary motivation for me to actually try a new recipe! Hooray! Ta-Da! Etc!

I made the Hungry Girl Chicken No-Harm Parm and the Hungry Girl Mozzarella Sticks, which only took about 20 minutes to prepare. Bonus: It tasted good! My notes on the cooking: I made the mozzarella sticks at the same time I made the chicken, but I just left the chicken in a little longer. I also used chicken breast tenders instead of whole chicken breasts (that's what I had on-hand), so they required about half the cooking time (I just omitted the second 10 min of cooking time). I used Trader Joe's Bruscetta instead of marinara sauce, because I didn't have any good thick marinara on hand. I also used a combination of smoked jack and parmesan instead of mozzarella on top of the chicken because that's what I had. Upped the fat content a tad, but that's ok with me, since the meal itself is so low-cal and all. I also served the chicken on a bed of baby spinach, something The Boy named "The Spinach Trick" - and something we saw recently on a Food Network show as a way to make your plate look more full (trick your mind into thinking there's more food, without adding more pasta, for example...and also a way to add some spinach to a meal without much effort). I love "The Spinach Trick." 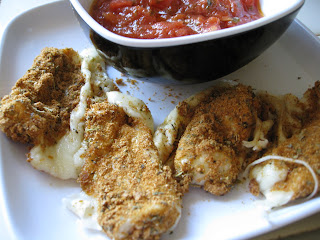 Mozzarella Sticks
I think I left them in a bit too long...they got all oozey and flattened and squished. Still tasted good though. Next time, I think 5 min in the oven instead of 10. 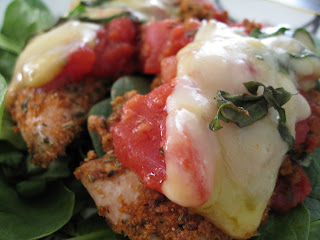 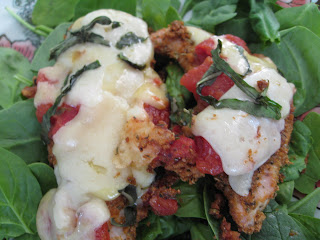 Another closeup of the chicken parm. My portion. The two little pieces kinda look like they're facing each other and holding hands, don't they? 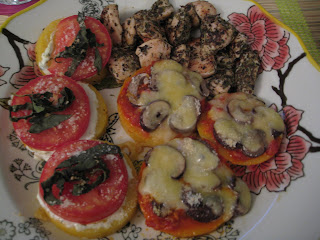 Not chicken parm, but this is what I made the other night. Polenta, 3 slices with garlic/basil creme fraiche from the farmer's market, tomato and basil. 3 slices with roasted red pepper spread, mushrooms and smoked jack cheese. Chicken accidentally crusted with Italian herbs: I poured too much into the pan...whoops. Always check to make sure you opened the "sprinkle" side of the container and not the "pour" side! This food lasted me for two meals. Yum!