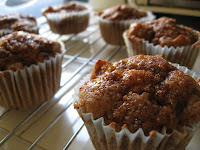 I just made the Hungry Girl Chunky Apple Cinnamon Muffins (here, towards the bottom of the page). Mmmmm.

Like the blueberry muffins, they came out a little more moist in the middle than I would have liked - almost underdone. I was scared to over-bake them though, and the toothpick I inserted into the middle came out clean! So I don't know, maybe next time I'll just bake them a bit longer. Maybe I'll stick these guys back in the oven for a bit?

The recipe says it makes four, but I easily made six. Kinda like how with the blueberry muffins, the recipe said it made six, but it really could have made 8-12. Does the Hungry Girl have gigantic muffin tins or something? Note: I did not peel my apple before chopping it, and I just chopped 1 whole apple instead of measuring out 1 cup of apple. More apple = good! Peel = good!

Anyway, these babies are much better for you than the apple-cinnamon-type muffins you find at Starbucks or Coffee Bean or whatever. And they are pretty darn tasty too! 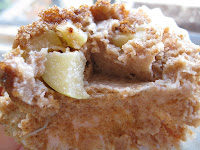 what the muffin looks like after a bit has been taken out of it.

In other news, I skipped the gym today because I thought I had a job interview this morning - it was postponed, but my gym mojo was gone at that point. Sigh...once I tell my brain I'm not going to do something, it is hard to change my mind! Luckily, it works the other way too. If I make my mind up to do something, I do it! And thus we have Chunky Apple Cinnamon muffins.

In case you're interested, this morning I had a part-egg-beater, part-egg scramble with spinach, leftover salmon with lemon and dill, sweet white onion, and cream cheese. It. Was. Delish.