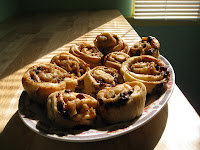 I did it! I tackled Smitten Kitchen's Ranch Rugelach. Don't worry, there is no Ranch Dressing involved (she named it Ranch Rugelach because she made it on a ranch). The recipe made over 30 large, puffy things (it claims to only make 24), and mine were not quite as pretty, but they taste pretty damn good! 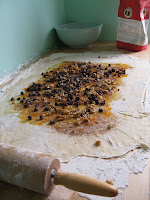 Other things that were different about mine: I made the dough on Sunday and finished the recipe in two batches today (one this morning, the other this afternoon - instead of making it all in one day). I used regular-sized chocolate chips instead of mini (I did attempt to chop them a little bit though), I didn't chop my raisins, and I'm not sure, but I don't think I "finely" chopped my walnuts. I just sort of chopped 'em up until they didn't look too big. ALSO, I DID NOT MAKE THE GLAZE. I fully intended to - I bought the ingredients and everything. But by the time the little buns were done and most of the mess had been cleaned up, I was too pooped to bust out my stand mixer (which may or may not actually work). Also, I tasted one, and they are so super sweet that I think the glaze would be overkill. So there. 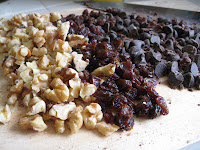 I had fun making these though, and I think with a little more practice, they would be a great weekend project to do with kids (lots of little jobs they could do), or even just something fun to do with girlfriends...if your kitchen isn't so tiny that you do the assembly on the kitchen cart you keep in the living room. Note: The kitchen cart actually worked really, really well for this. Plenty of room to work a rolling pin (that I got for free, btw), and pretty easy to clean up. The kitchen is only slightly above disaster-level, but much of that was from the lack of post-dinner cleanup last night. Load #1 of dishes is done, and the rest is totally manageable.

All in all, fun baking project! And if you're in the neighborhood, stop by and grab one so I don't have to eat them all! :-)

Full 15-photo slideshow of the process: