I am officially at the age where my friends are starting to get married. They're dropping like flies, and thanks to Facebook, it's all clearly documented. It's odd to be at the age where this is normal; because they're 25 or 26, it's not quite as shocking as it was when we were fresh out of college at age 22 or so. My dear friend Colette got engaged a few weeks ago, and while it wasn't a surprise (she and her now-fiance have been together for years and recently bought a house together), it was pretty exciting. And oh, the sparkly ring. So sparkly.

However, I was not prepared for the SECOND of my long-time friends to get engaged just a few weeks later! Reed and I have been friends since we were about two years old. We have been friends for over two decades. That's a long time when you are "only" 25 years old.

We knew this was coming. This November, she and David will have been together for 7 years. They have been living together in Colorado for the last 2 (he is getting his PhD). We all knew it would happen Someday...and Someday came on Friday, when David surprised us all by flying into Berkeley and "tricking" her into stumbling upon him on the UC Berkeley campus (where they met). He got down on one knee, she said yes, and the celebrating began! 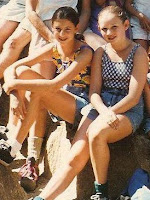 On Saturday night, after David's parents took us all out to dinner, Reed told me that of course, I would be her Maid of Honor. I accepted, even though she hadn't asked so much as notified :-) A lot has changed since we were little (and I think I can confidently say that we've outgrown our severely awkward phases - see photo, circa 1996), and even though we lost touch for a few years in late high school and early college, the day we reconnected it was as if no time had passed.

She is my oldest friend and I couldn't be happier that she and David are finally engaged. Expect some wedding updates as I fulfill my Maid of Honor duties and I have weddings on my mind. This should be fun!


*I have had house guests every night but one since July 9, and will until Tuesday morning July 21, so apologies that the posting has been somewhat infrequent. It's been a bit busy around here, especially with the whole adjusting-to-working-again thing. I have photos on my camera that need uploading, and updates on the work-front as well. Coming Soon!*
Posted by Kim at 2:01 PM