I wanted to make chocolate chip cookies today, to bring to a coworker who is going to be working very late and very early hours today and tomorrow. When I realized I was out of butter, I started to wonder how I might attempt chocolate chip cookies without the blessed butter. I found this recipe, which looked to be the best out of all the butterless chocolate chip cookies out there on the internets. I followed the recipe exactly (I substituted 1/2 cup of whole wheat flour in place of 1/2 a cup of the white flour), but it looked a little dry, and the last bit of flour wouldn't blend in. I thought about adding a second egg, since my usual cookie recipe calls for two, and this called for just one, but I decided not to.

But I did add a little applesauce. I had read that sometimes applesauce could work as a butter substitute - I've used it to replace oil in cake mixes, but never in cookies. I added about 1/2 cup of applesauce, maybe less, and stirred until the batter looked like it was ready. Then I added some oatmeal. I have no idea how much; I just poured some in. Why? I don't know. I'm not always one for precision, and I felt the winds of experimentation brewing. I added the chocolate chips until I was sure I had put too many in the bowl - they didn't all get stuck in the batter. Some were just rolling around in the bowl. I thought, "Wow. These are going to be full of chocolate chips."

And then, I plopped the sticky batter on the baking sheet (on my trusty Silpat), and baked. They turned out...fine. They taste good, but the texture is a little rough. Maybe these are just a different kind of cookie, and I'm not used to butterless cookies. I mean, they don't taste bad. They pretty much taste like your standard chocolate chip cookie. But I do miss the butter. 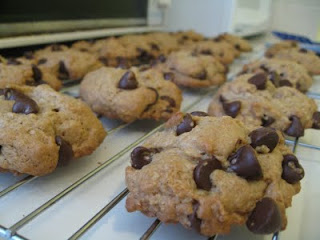 I am full of chocolate chips. I taste good, but not spectacular.
Posted by Kim at 3:36 PM