In my New Year's sort-of tradition, I should be posting something about my resolutions for next year. I can't believe this is the third one I'm doing for this blog - how time flies! I don't usually remember to do a wrap-up post about my resolutions from the previous year, so in the interest of staying on top of things, I'm going to do one now. As usual, my resolutions are fairly broad, but I have so many times in my life that I have to (I mean 'get to,' tee hee I love lists) be specific, I kind of like leaving it sort of open-ended. I'd like to think of these more as general themes for the year.

2009 had its high points, but it was also a rough year for my family. Here's hoping 2010 moves forward from the good and away from the bad. Overall, I know that I am very lucky in so many ways - I have a wonderful family and friends and a job and a nice place to live. There are so many people who have it much worse, but that doesn't diminish the struggles we all have. I'm very lucky to have a family who is strong and cooperative and willing to work together to make things better.

Today is low-key - Will is playing hockey (and filling my car with gas and bringing us lunch! yay!) and I'm doing laundry. I also want to go to the grocery store, since we're kind of low on food at the moment (that's what being out of town for essentially 3 weeks will do!). Tonight, we're going to see Avatar (in 3D, whee!). Then, we'll probably find a bar or something to ring in the New Year. Personally, I'd be happy to come home to some champagne and chocolate cake, but maybe that's just me. Some year, I'm going to have a little New Years party of my own, but this year, the apartment is still an explosion of holiday stuff! I'm looking forward to a relaxing weekend of unpacking, straightening up, and just hanging out. After the whirlwind of holiday travel that was December, it'll be nice to take it easy for a few days before heading back to work. 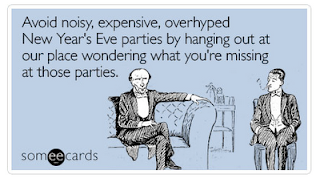