My friend Sara and I made Omnomicon's Rainbow Cake yesterday, and I thought I'd share some pictures.  It was very fun, and the cake is awesome, if I do say so myself!  Thanks to Sara for taking all these pictures and uploading them to Facebook so I could steal them.  Also for having adorable kids who "helped" with the dye-mixing.  :-)

Mixing the batter - we made a double (which is really a quadruple) batch, since we were making two two-layer cakes.

We made some crazy-color cupcakes with the leftover batter. they were puffy and delicious.  The orange and blue ones reminded me of Mario mushrooms.

Cake layer #1, ready for frosting...they looked so neat, I almost didn't want to frost them.

I used rainbow chip frosting.  It was a little warm and I barely had enough, but I think it worked nicely. 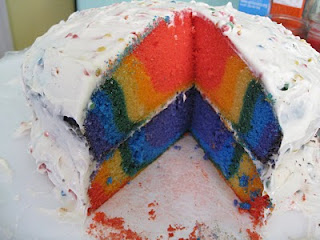 The inside of the cake.  Glorious. 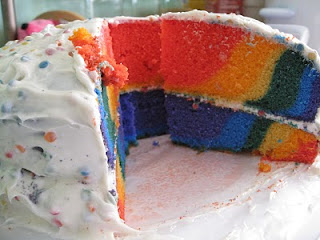 Cutting a slice.  I wonder if we should have flipped the layers -- this was the way we were supposed to do it, but it might have looked more uniform to have the colors lined up (in theory, the purples meet in the middle, but since it spread out so much on the bottom of the top layer and was in the center of the top of the bottom layer it didn't quite work out).  Oh well, it still looks cool. 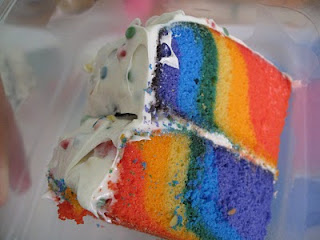 A slice for my neighbors (they actually got two slices).

Oh, we also made peanut butter banana chocolate chip bread. Because we are overachievers.
Posted by Kim at 6:35 PM