for Chanukkah, and it. is. awesome.  I've wanted a food processor for a while, but figured it was something I'd get "eventually" or "someday," and never bought one for myself.  Mostly, I wanted one so that I could make latkes at Chanukkah time, and while I missed out on that this year (though never fear, we made them for Christmas, a new tradition) I still wanted to break in my new toy!

When I saw this recipe for lemon bars over at The Kitchen Sink Recipes, I knew I had to try it.  I mean, hazelnuts! Lemon! Using the food processor!  I've never made bars, so I was kind of excited to try this out. Besides, they just looked so good.

They turned out...fine.  I think I may not have baked them long enough, because when it got to the whole "add the lemon mixture to the hot crust" thing, I had a slight problem.  The crust didn't stay put when I poured the lemon mixture on top, but rather bubbled up and combined with the lemon, forming this crusty lemon combination. I hoped the crust would sink back down when it baked, but it didn't really, so some of the bars were more like sandwiches. Some of them were bar-like.  Some were just mushy.

The other issue was that the lemon filling was a bit oozy, like it didn't quite set right, even though I baked it for longer than I was supposed to.  The pieces in the middle were more like custardy goo than a lemon bar, but hey...we ate them all.  They were a little too sweet, so next time I'd probably use less sugar or more regular lemons (I used mostly Meyer lemons).  But overall, it was a nice experiment, and I had fun using my food processor.  I bought way too many hazelnuts, so I'll be sure to try these again! 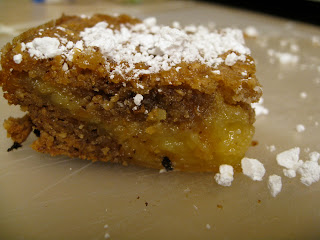