I love a piano

We interrupt the "blogging about unpacking and also about how I have a bunch of giveaways to do and reviews to write and a salami party to plan but omg I'm buried in boxes and can't write that fun stuff yet" for some breaking news!

Last night, I saw an ad on Craigslist for a free piano. And then I saw this photo. 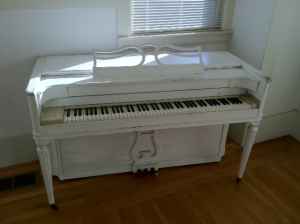 I decided that if there was anything I could do about it, this piano would be mine ours.  I talked to the guy who posted the listing this morning, and he said the only catch was that it had to be picked up by Wednesday at noon.  After confirming with my landlord that it was ok to have a piano, I started calling around to figure out how I would be able to get this piano to our house in under 24 hours.

I unsuccessfully posted a TaskRabbit Task, but thanks to Craigslist, I found movers who listed both pianos and last minute moves as things they could do. They asked for $180. I went to look at the piano to make sure I wanted it (you know, to make sure it wasn't broken or anything). I haggled the movers down to $160.  I'm meeting them at the piano's current home between 9-9:30am so they can load it in the truck and drive it to our place.  And then the piano will be mine ours.  I even cleared a little space for it in the formal living room room where I am currently keeping the giant stash one of the giant stashes of boxes yet to be unpacked.

"But Kim! There's no such thing as a free piano! Are you sure it's not terrible? Why would they just give away a perfectly good piano?"  That's why I checked it out tonight, genius.  :)  It actually sounds really nice.  It's in pretty good tune, though I'm sure it'll need to be tuned after the move.  The guys getting rid of it have to move (landlords are selling their house), and don't have room for it in the new place.  One of their old roommates brought the piano with him and left it in the house when he moved out, so they're not losing money on it or anything.  They just need it to be out of the house and can't take it.

Win for me us!  Of course, I am just assuming that Will is going to be happy about this (I'm sure he will be), because it's going to be a big surprise for him when he gets home (along with the Everything Is Unpacked Yay surprise? Right? That's still gonna happen?).  I might get to talk to him tomorrow, and I'll try my best not to say anything about it...hooray for surprises! And a piano!
Posted by Kim at 10:22 PM