And then there were cupcakes...

These cupcakes are sinful; there's no denying that.

I make them just about once a year, to celebrate my husband's Irish heritage and the holiday his family celebrates with such enthusiasm (my mother-in-law sends us an annual St. Patrick's Day care package, complete with Irish soda bread and some form of Jameson's somethingorother...this year it was truffles).

Rather, I say that's the reason I make them. And in some ways, it is. I mean, the "Irish Car Bomb" is a Somewhat Offensive American Traditional St. Patrick's Day Drink (though I can't say I've ever had one). But that's not the real reason, of course.

The real reason is that they are delicious, satisfying to assemble, and immensely popular. They're pretty and fun for groups and just boozy enough to make you feel a little naughty...but still, they're just cupcakes! What's the harm there?

This year, Katherine and I baked the cupcakes before starting on the Pre-St. Patrick's Day Ladies' Dinner, but by the time the other two ladies had arrived and we'd all been enjoying our Irish Stout with Vanilla Vodka (do you like cream soda? do you like drinking? try this.), and well, we decided to eat dinner before finishing the cupcakes, and then we were too full and too drunk to do anything but smile sleepily as we laughed together as ladies tend to do.

So it wasn't until Monday, two days later, when some friends came over to help organize the pantry (and you know, have dinner), we finished the cupcakes. The guys scooped out the insides and made the ganache (aww their first ganache...adorable) while the ladies organized the crap out of the pantry (and PS the photos on the blog post linked above do not do justice to the transformation).

And then I made the frosting. Oh, the frosting. This year, I decided I was too lazy to deal with the star-shaped pastry tip going to go for a more foamy, heady look. You know, to imitate the foam on the top of a nice stout? I whipped the icing more than usual, and added extra Bailey's for extra creaminess. And oh man, I think I've found a winner. 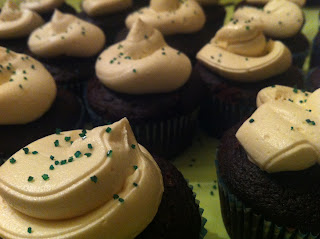 Other than that slight frosting change (and maybe a little extra whiskey), I make these according to the original recipe (from Smitten Kitchen). And I can't believe I haven't blogged them before (my brain says I have, but the internet disagrees with me). 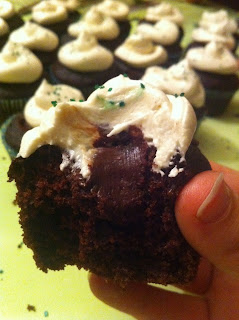 These babies are so tasty I've been thinking about making them again, and not waiting very long to do it. What's an excuse to make them in April? :)

Or perhaps I'll change it up and go with a lemon cupcake, filled with Limoncello ganache (is that a thing?) and a strawberry champagne frosting? Oh, the possibilities...