Garden Season is Upon Us!

Spring is here, and for the first time in months, I found myself with a weekend and nothing to do with it. No plans, no travel, just rest. So of course, I woke up at 9:30am. After a few hours of vegging out on the couch with HGTV, I cooked up a delicious breakfast with St. Patrick's Day leftovers (corned beef with scrambled eggs and Irish cheddar, fried mashed potatoes, sauerkraut, and dark rye bread).

I decided to take advantage of the lovely weather to take care of some much-needed weeding out in the garden. This time of year, the Nasturtium goes absolutely nuts, and will take over the entire garden if we're not careful! Our Dinosaur Kale, Rainbow Chard, and Parsley are still doing incredibly well, and I didn't want them to become overrun with Nasturtium. And I know, Nasturtium is edible and whatnot, but when I see it taking over the yard like this: 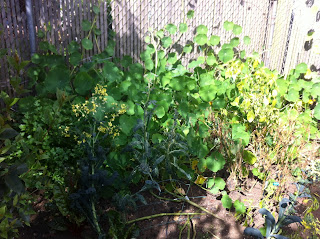 I just want it gone. Anyone have any killer Nasturtium recipes? Let me know. I'm sure it'll be back by the time we're ready for planting.  Anyway, this is what it looked like after approximately 3 minutes of pulling (Nasturtium is incredible easy to pull out of the ground). 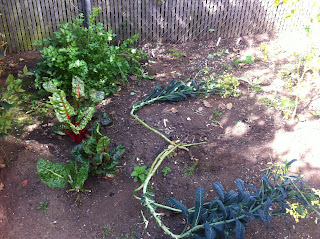 Check out that Rainbow Chard (left, front) and Parsley (left, back - it's like a bush)! There's also one last Padron Pepper plant that looked alive enough to save...we'll see how it does over the next few weeks. Oh, you want to know about the sideways W (or backwards 3, or capital letter E) in the middle of the picture? Oh...um...that's the Dinosaur Kale. 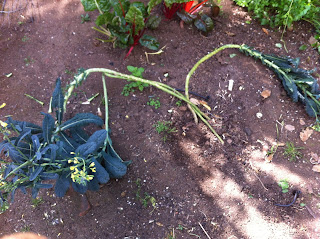 The Dino Kale has been growing horizontally lately, sprawling along the ground instead of growing straight up in the air. I'm guessing it's because they're so top-heavy, and because they lean into the sun. After some iPhone Googling and some pacing across the overgrown grass, I determined that sometimes kale just gets tall and falls over. Sooo there's that.

I hacked a little solution, by way of a large tomato cage. It was tricky, because the stalks have spent so much time crawling along the ground that I didn't want to accidentally uproot them by forcing them in the opposite direction. Eventually, I got all three healthy stalks up into the cage, and tied to the top rung. 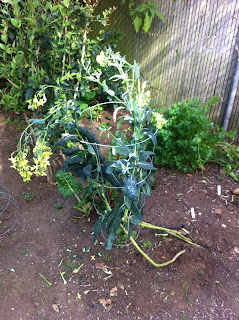 I have no idea if this will actually work or if it will just make things worse, but at least they're not sprawled out in the dirt anymore. Maybe this will even help the tiny-chalky-white-bug infestation problem?

I also clipped a few blossoms -- Kale and Nasturtium: 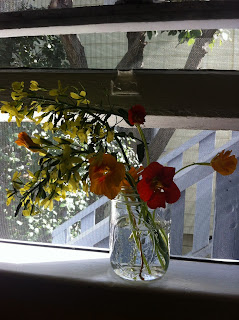 And lavender (which are a little too short for the bud vase - I need some rocks or something, I think: 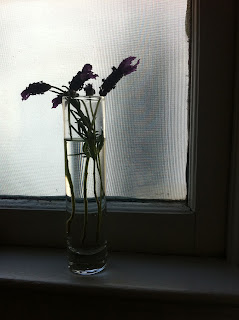 The garden's looking almost ready for planting now. We'll have to do a little soil turning-over I think, and figure out what to plant this year! Definitely thinking strawberries in the half wine barrel, and maybe bell peppers in addition to the Padrons this year?

What are you planting these days? Are you still covered in snow?