Summer is upon us, and the garden is in full swing! We've already had two very successful harvests, and it's looking like we'll be seeing more of the same for some time.

We planted back in May, after the annual starter plant sale at the Edible Schoolyard. But first, we had to  get rid of a few remnants from last year...

With all the junk out of the way, we had room to plant! And plant we did! Oh man, did we plant. 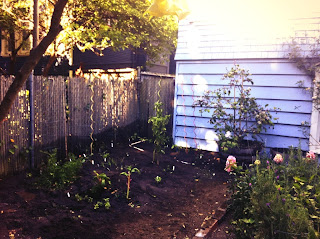 What you see here is a garden, with five types of tomatoes, eggplant, red russian kale, toscano kale, arugula, basil, gold coin onions, padron peppers, three other kinds of peppers, two kinds of beans, zucchini, crookneck squash, lemon cucumber, and strawberries. Plus the padron peppers, rainbow chard, and parsley from last year (though the parsley has flowered and is basically useless now), and the lemon tree.

And that tall plant climbing up the spiral garden stake (kind of right in the middle of the picture - not the lemon tree)? That's that one remaining padron plant from last year, which looked so sturdy that we didn't rip it out. It lasted through the winter and is going crazy now! Like, super flourishing, guys. Not just "not dying" like I would have expected it to be.

This is a lot of garden, guys. It's a tight fit, but we had our first harvest a few weeks ago, and I'm pretty stoked for the rest of the summer. I'd like to thank our automatic sprinkler system, and my can-do husband, who was responsible for a large majority of the junk removal.


And then on Monday night, when we returned from a week in Portland, we picked all this:

In fact, we harvested another five padrons a few days later, and cooked them all up on the Fourth of July. We've eaten almost all of them, and it seems like I may have gotten the only spicy one out of the whole bunch! We made pesto out of the basil, have been using the arugula as a base for salad, and I sautéed that entire bunch of greens down to about 1 cup, which I'm planning to eat with some eggs this weekend. Eating what we've grown! So fun!

We're having an excellent garden season so far, and it's only been about a month and a half. The squash are starting to come in, and the tomatoes, while not yet red, are plumping up. I have low expectations for the eggplant, but we should have some continued pepper luck. They seem to like our garden.

Unfortunately, we're starting to see some aphids and those little green caterpillars that were responsible for so much damage last year. I'm thinking about getting some ladybugs to release, just like we used to do when I was a kid and the aphids got into the roses. What will eat the caterpillars but not the greens?

Anyone out there gardening? Harvesting yet?