It's always nice to visit friends who happen to have a robust garden. On Saturday, as we sat around eating homemade nachos and playing with the kids, I offered to help pick some beans and cucumbers - their vines were overflowing, and they're about to go out of town. I happen to enjoy harvesting; there's something thrilling about the hunt for fresh fruits and veggies, eating some straight off the vine and thinking about what you might like to do with the rest. And they were happy to have the help.

We picked what I thought was just an insane amount of beans (green and purple) and cucumbers, but it turns out that this is an average harvest for them, and they get this much booty every 7-10 days!
My goodness. Insane. And so delicious.
What to do with all these beans and cukes? I'm a bit of a pickle fiend, but somehow I've never actually made my own. Rather silly, really. Anyway, I couldn't get the idea of pickling out of my head, so I looked up a recipe, bought some Ball jars, picked up some spices, and got to work.

For the purple beans, I did three different levels of salt: one followed the recipe, one used significantly less, and one was half-full-salt and half-less-salt. This was sort of by accident at first (I really need some reading glasses for reading recipes on my phone, I swear), but I decided to roll with it rather than making them all according to the recipe. It's an experiment, right?

No special canning equipment, no boiling the jars to seal them (these aren't shelf-stable and have to be stored in the fridge after they're done fermenting). So easy. Supposedly in about 3 days or so, these should be all kinds of pickled goodness. If this works? Man, do I have a summer full of pickling ahead of me!

And a little bonus organization-gasm for all you organization freaks like me out there... 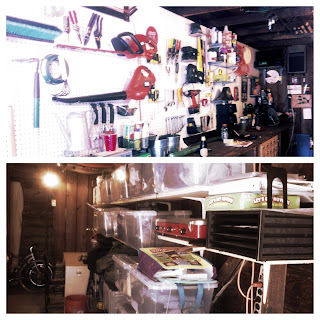 LOOK AT MY FRIENDS' FREAKING AWESOME GARAGE (hipster filters optional)! This is all the husband's territory, and he's got quite a sweet system going on there, what with the pegboard for all the tools and the shelves with organized plastic bins. It's hard to see, but there's a library card catalog screwed into the workbench to hold screws and whatnot. Super cool (they're both teachers). He even has a few bunches of shallots hanging from the ceiling to dry right now. Sigh. So nice. I think he's my spirit animal.

I'm curious to hear about your pickling adventures. Have you pickled? Do you like pickles?