About a month ago, my dad passed away. It took me two weeks to start writing this, and another two weeks to feel like I could come back to finish, but the one-month anniversary of his death feels like as fitting a time as any to come to terms with the feelings I've mostly been pushing aside in the hustle of returning to work and life and pregnancy and trying to forget and not forget at the same time. His death was sudden, and unexpected, though he had been in recovery from major cancer-related surgery. To summarize: everything was going relatively ok, he was stable, and looking at a long and slow recovery. But a recovery was in the cards. And then he crashed. His body couldn't sustain the trauma of the multiple surgeries he'd been through (there were a few surgeries following an infection that came on suddenly more than three weeks after the first surgery), and at around 3:30am on April 21, he was gone. The doctors said it likely took less than 15 seconds for him to pass, and that he didn't feel anything, as he'd been sedated and on a lot of pain medicine for over a week. It was less than 15 minutes between when they called my mom to tell her they were trying to resuscitate him and when he passed, moments before she got to the hospital. It's been a really tough road since then.

My sister said it very well this week:


4 weeks today and everything still feels wrong and fake and like this is someone else's life and from what I've been told it will feel like this for a long time.

I don't want this to just be a post about grief, though I know that the overwhelming permanence of it all is normal, and all ways of processing are normal, and of course it's my right to write an entire essay on how this just doesn't fucking seem normal and I find myself just unintentionally believing it's not true. That it's not real, that in a few weeks he'll come back from wherever he's been and we'll tell him the stories of how we rehearsed our emotions and how much work we did and he'll be proud of us for trying so hard and loving him so much. I try to teach myself that this isn't some fire drill, and that it's real and true and forever, but I don't really know how to teach myself, and if I'm being honest, I don't really want to. I hope that someday I'll come to terms with it and not just cycle through not believing and then realizing my mistake over and over again.

As far as I'm concerned, nobody knows for sure what happens after we die. There are theories, and there are strong convictions, but I'm not convinced of any certainty here. It's the unknowable.

In the days and hours before my grandma passed about ten years ago, she had moments of (morphine-heavy) lucidity where she talked about how her long-since departed sister and husband were waiting for her. She was ready to join them, and they were ready to take her. Where, I'm not sure. She mentioned something about them waiting under the trees, so I've always pictured a dreamy forest, dappled with near-dusk sunlight and that sort of misty fog you see in dream sequences in movies. It was comforting for me to think that maybe that was a possibility -- even if it's just the drugs, or the way brain synapses fire when you're about to pass on. That there was a chance that death is a welcoming, warm embrace from your loved ones and not just a light switch turning off.

My dad and I often talked about the insanity of certainty in the face of the universe's expanse. How absolutely ludicrous it is that the universe just keeps going. That outer space just keeps expanding. Into what? Where is the edge? And what's on the other side of the edge? Obviously, it's something that is conceptually just too great for our minds to conceive. We'd look up at the stars, realizing that what we see is already gone, that what our brains could understand was barely the beginning. I like to think that he knows now, or that he's learning now. That there's some secret unlocking of the mysteries after you've passed (to where?). We agreed that it was impossible to know, and silly to feign assuredness.

But even if I imagine my dad hanging out with the philosophers and Bowie and Prince and his beloved dog Charlie, and having a never ending view of the stars, learning about life's mysteries, I still miss him. I think about going to Yosemite to scatter his ashes next month, and I wonder if I'll ever be able to visit my favorite park with a full heart again. I wonder if he can really talk to my unborn daughter through some silent cosmic portal. I wonder if these moments of breathless emotional floods will become less frequent, and less intense, if the moments of levity will become the new normal. I wonder if I'll be able to have a normal life, and how guilty I'll feel if I "move on" - even though I know that's what he'd want.

It's impossible to believe that he's just gone, and not a phone call or a short flight away in LA. Even when I picture his body laying peacefully at the mortuary, it's hard to reconcile. I still remember the last week we spent together when he was recovering from surgery and wish I could go back to our mutually-pained walks up the stairs and to the end of the block. When we fell asleep on the couch watching nature shows and tried to come up with foods that didn't sound nauseating. It was such a weird time to spend together, and of course I'm grateful that I had the chance to spend so much concentrated time with him, not knowing it would be the last time. But I'm still fucking pissed that it was the last time. It shouldn't have been the last time. And I say these words, and I feel these feelings, and even still it doesn't seem possible.

I was unable to speak at his memorial, an amazing music festival of a tribute full of family and friends and light and music and food. I was unable to speak because it's easy for me to turn into an emotional wreck in normal life, and I knew that with that and the pregnancy hormones, I'd just fall apart (I was right). I was unable to speak, but I had the cantor read something I wrote, that you can read here if you want to. I still have a hard time speaking about my dad being gone. It's easy to relay the facts, with a sort of "yeah, it was and is incredibly shitty" shrug. It's nearly impossible to talk about how I feel without breaking down, and it's unthinkable to talk about the rest of my life devoid of the dad I loved, and will always love, so deeply.

It's been a month, and it's still tremendously difficult. I hear it will slowly get better, and that I'll even be ok with it getting better. That it won't feel like ignoring or forgetting, but healing. I don't quite buy it yet, but perhaps that's yet another mystery of the universe that I'll understand when I get there. 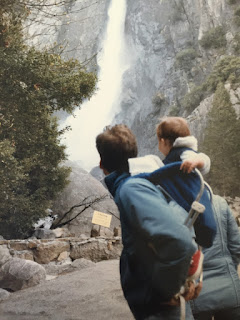 Email ThisBlogThis!Share to TwitterShare to FacebookShare to Pinterest
Labels: getting serious, self-care